The nearest star to the Sun is a faint red dwarf in the constellation Centaurus known appropriately as "Proxima" Centauri -- the "near one". It was discovered in 1915, and no closer star has been found since then. 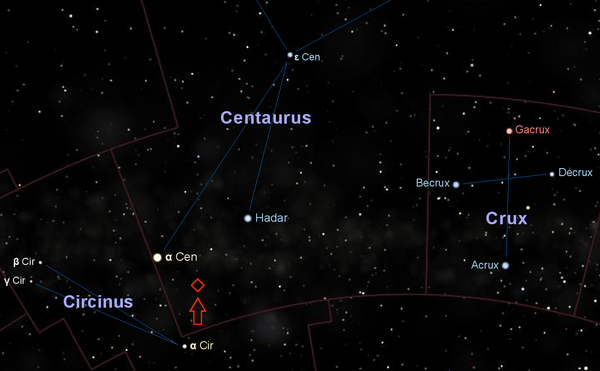 Proxima Centauri is a companion of the bright star Alpha Centuari 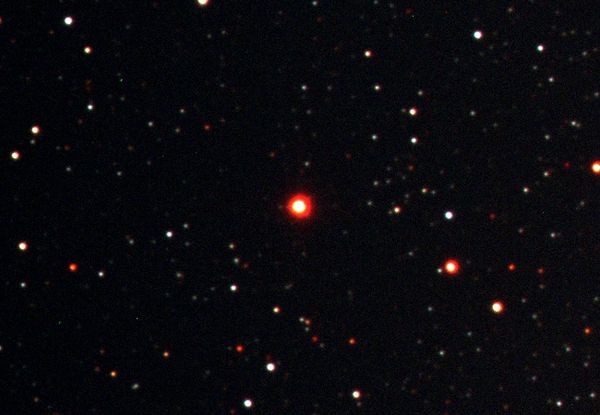 A color image of Proxima Centauri from our telescope in Australia

We know the distance of Proxima from its parallax which is illustrated in this figure. 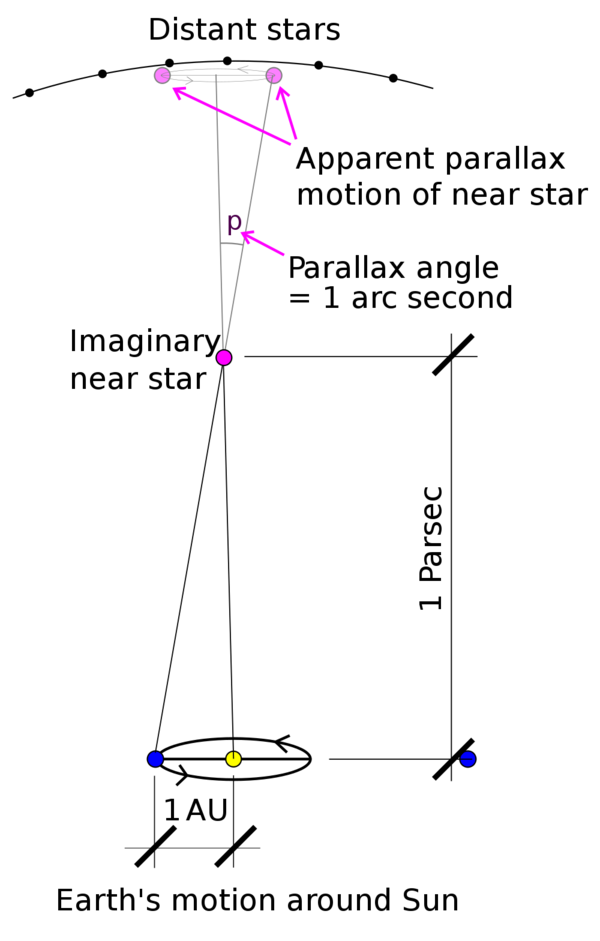 The farther away an object is from you, the less it seems to move when you change your position. You use it without thinking to judge distances -- it is the basis of depth perception. Yet even this nearest star is so far that if we move 1 astronomical unit through space, the average distance from the Sun to the Earth, the apparent direction to the star will change by less than an arcsecond!

Astronomers use the parsec to measure distances to stars because if a star were 1 parsec from us its parallax when the Earth moves 1 astronomical unit would be 1 arcsecond. A star 2 parsecs away would have a parallax of 1/2 arcsecond, 3 parsecs and it would be 1/3 ..., 10 parsecs 1/10th and so on.

A parsec is 3.26 light years, and Proxima Centauri is 1.3 parsecs. If we could watch it appear to move during the year, it would follow a little ellipse in the sky about 1/1.3 arcseconds in semimajor axis, that is about 2/1.3 arcseconds across. As you will see soon, this is a very very small angle.

Of course all stars in our Milky Way are orbiting around the galactic center. The speed of stars in their orbits depends on how far they are from the center and also on their past interactions with one another, and as a consequence stars pass by one another. In fact, it would be really unlikely that Proxima and the Sun shared the same motion through space. Since Proxima is moving relative to the Sun, we ought to be able to see it move with respect to the much more distant stars behind it. The steady apparent motion of a star against the background that sets the celestial coordinate reference is its proper motion.

You know these effects must be really small because when you watch stars night after night they always seem to have the same position relative to one another. Their changing position in the sky is a consequence of the Earth's rotation. If we watch year after year we can actually see the nearest ones move. The star with the largest proper motion is "Barnard's Star", another red dwarf only 6 light years, 1.8 parsecs, away. Typically nearby stars have large proper motions because the angle covered by a motion through the same distance is greater if they are closer.

Answer the questions that come up in the following material.

Suppose, for example, a star 1 parsec away moved through space 10x the Earth's distance to the Sun, that is, 10 astronomical units. To us it would seem to move through an angle of 10 arcseconds. If it were 2 parsecs away the angle would be 10/2 arcseconds and so on.

1. How far through space would Proxima Centauri have to move for it to seem to us to change its position by 1 arcsecond?

We are going to help you look at images of Proxima Centauri recorded in 2007 and 2009 by our telescopes and also recorded in 1997 by a large survey telescope.

Prepare to Use Aladin

If you are doing this in the astronomy lab classroom, our computers already have the images and Aladin software loaded. However, you may use your own laptop/notebook by following these instructions.

Run Aladin in your browser

or it may already be available if you are doing this in the astronomy lab on campus. 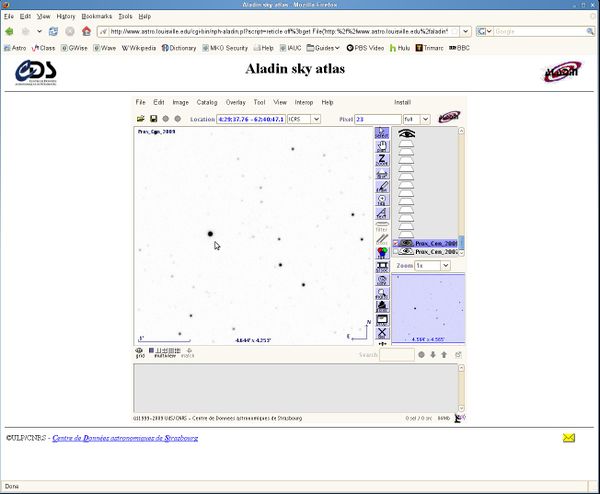 Proxima Centauri is at the cursor in this window.

Use the "File -> Open local file" menu and load the two images of Proxima Centauri to reproduce this view.

Notice that the images on this screen in two different "layers". You select the layer that is visible by clicking the little tick box for it on the right side. One of the images is from 2007, and the other is from 2009.

By the way, the images are black on white to make the stars easier to see. Black means brighter, white means dimmer. If you prefer a more realistic picture you can make a change in the menu for each image.

The one for 2009 will be selected automatically when you start. Notice that when you move the cursor around over the image the celestial coordinates under the arrow will be updated. You may select a function like Pan or Zoom from the menu on the right. You might want to experiment with these. You can always close out the browser and restart if you make a mistake and cannot figure out what to do.

The Pan function allows you to move around the image. The window on the lower right will show you which part of the image you are looking at. The Zoom function zooms in on each click. Hold the Shift key down to zoom out, or select the zoom level from the menu on the right side.

Zoom and Pan to get a good close look at Proxima Centauri in the 2009 image. Place the cursor over the center of the star. Read the Right Ascenscion and Declination from the window.

2. What were the celestial coordinates of Proxima Centauri in 2009?

Now tick off the 2007 image on the right and repeat the process.

3. What were the celestial coordinates of Proxima Centauri in 2007?

They should be slightly different. If you're having trouble identifying the star look at the sample screen above, or at the color image at the top of the unit. Proxima is the brightest star near the center of the images.

Each of these images is contained in data called a "FITS" file. The file has exactly the measured brightness at each pixel in the image, information about how the image was recorded, and a calibration that converts the position in the image to a position in Right Ascension and Declination on the sky.

To see how this works let's look at the FITS Headers for each of these images and find the the date and time of the observations. Select the image you want to examine with a left click on its layer on the right. Then

Let's try to find how far Proxima appeared to move between the two dates. You already have the two sets of coordinates and you can probably tell that it moved a few arcseconds in about 2 years. You can display two or images at the same timein Aladin by selecting "View" in the Aladin menu:

At first you will only see an image in one of two panels, but now you can turn on two images by checking them in the layers shown on the right:

After you have checked off both, highlight the 2007 image so that Aladin is working on it. You will see both images and the operations apply to 2007.

Lastly, go back to "View" and check "Match scales and orientation":

In this mode if you zoom or pan in one image the other one will follow. Try to zoom in 2x. Watch the scaled down finder window on the lower right to see where in the main image you are looking, and center on Proxima Centauri in the 2007 window.

Select the distance tool that's marked "<-->" and labeled "dist". If you click with the left mouse button it will start an arrow that continues until you unclick. The arrow will show in both windows, and you can measure the separation of Proxima in images taken on two different dates. For this to work well in this case you will need to show the images zoomed in 2x or more so that you can tell when the point is centered on the star.

5. Through what angle in the sky did Proxima Centauri move between 2007 and 2009? The distance tool will label the plot in arcseconds. Note that at the bottom of the images there are arrows pointing East and North. Also, in what direction did Proxima move between these two dates?

When you looked at the records of the two exposures and found the date of the observations, you noted in your answer to 4 that they were in 2007 and 2009, about 2 years apart.

6. If we want to measure the motion of the star, why is it important to take exposures on nearly the same date each year? (Hint: What would be the effect of viewing the star from different places in Earth's orbit?) Each day has 24 hours and there are 365 days in a calendar year.

7. About how many hours separated the two observations? Multiply this by 3600 and also find how many seconds elapsed between the two dates.

Since we know how far away Proxima is from us, and we know the angle it moved through between the two observations, we can calculate the distance that the star must have moved through to make it appear to cover that angle. It's very simple to do this in parsecs, because a star 1 parsec away would move 1 astronomical unit if it appeared to move 1 arcsec. Remember that the farther away the star, the smaller the angle it appears to go through for the same distance. Let the angle be A in arcseconds, and the distance to the star R in parsecs. Then the distance the star moves is S in astronomical units given by

Proxima Centauri is 1.3 parsecs away.

8. Based on your measurement of the angle Proxima moved through, how far did it go in space over the two years between the dates of the two images?

9. What is Proxima Centauri's speed through space in km/s?

Aladin offers access to a Virtual Observatory of images taken by major international facilities. The Digital Sky Survey is a database of images that that includes photographs taken with a wide field camera at Palomar Observatory in California 50 years ago, and more recent ones taken with similar cameras at other sites. They provide the basis for pointing the Hubble Telescope, and a marvelous archive of the sky as it was when the images were recorded. The photographic materials have been digitized and calibrated and are available on line.

Let's add one to the images we have here. First, right click on the layer icon for the distance drawing you made, and drag down to the "delete" option to make it go away. Go up to the View menu and select 4 panels:

Now you can add a new image in one of the empty panels by using the File menu:

The new image will load from the Space Telescope Institute in Baltimore.

It will help to set the Zoom down to 1x now because this image was taken in 1997, 10 years before the 2007 image from our telescope you have studied.

Left click on the layer icon for the the STScI POSS image so that Aladin is working on it. Use the Pan tool to center Proxima Centauri, probably in the lower left of the four panels on display.

Let's link all the images together by again using

and select the Distance tool marked with "<--->" on the right menu. Point at Proxima in the 1997 image and draw across toward the 2007 position. Notice that you can continue on through 2007 to 2009. Proxima is moving along a straight line through space. It moved a few arcseconds between 2007 and 2009. 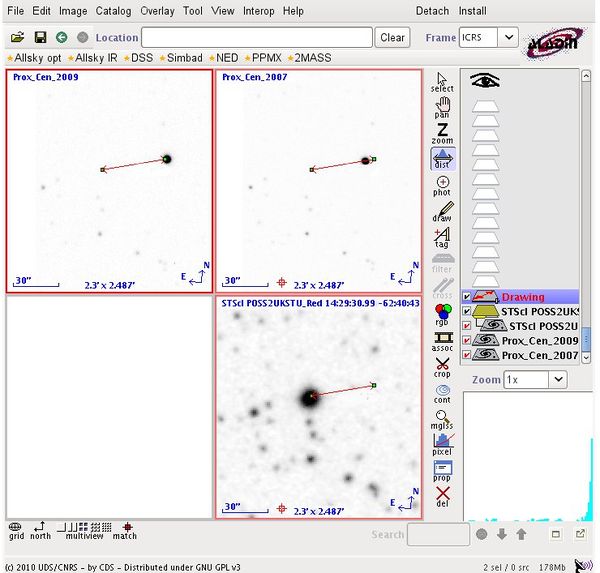