Measure a Nearby Supernova

The galaxy Messier 101 in Ursa Major is sometimes called the "Pinwheel" because it is spiral galaxy seen face on. It is relatively nearby, close enough to permit imaging its Cepheid variable stars and determining that its distance is 6.6 million parsecs (Mpc).

On August 24, 2011 a supernova of Type Ia appeared that was immediately captured in small telescopes well before it reached its maximum brightness. Subsequently the increase and eventual fading of the exploding star was recorded worldwide, and its behavior is the basis for a much improved understanding of the the processes that led to its demise. Supernova of type Ia are exploding white dwarf stars. They have the remarkably useful property of being extraordinarily luminous, and of reaching the same peak luminosity no matter the galaxy or the star of origin. Astronomers call objects like this "standard candles". Since their actual luminosity is know, their apparent luminosity tells us their distance.

Here is how the SN2011fe appeared to a telescope at the University of Louisville's Moore Observatory 2 days after the discovery: 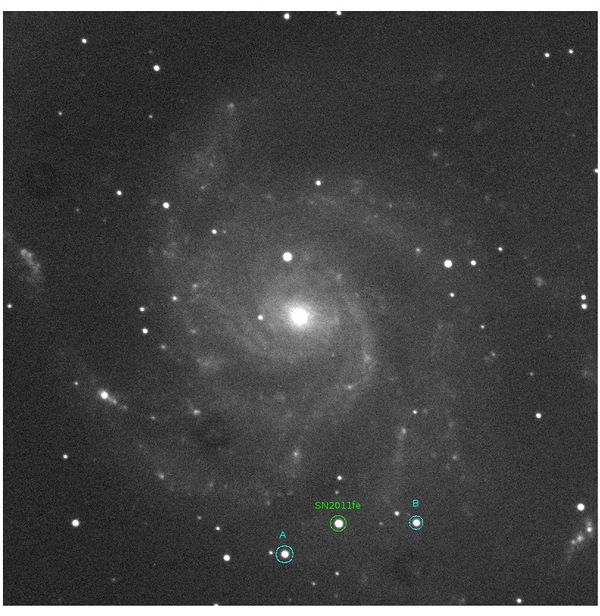 This is an image in red light, taken through an "R" filter. The stars labeled A and B have been been measured to use as references to find the apparent magnidute of the supernova on this night. In red light they have magnitudes:

We will use ImageJ to look at this file. To make it easier for you, we have cropped the original images and compressed them, while preserving the digital data. When you click the link below you will be connected to our server, ImageJ will load, and the image will appear in the usual window after a short delay. Although is image is cropped and compressed, it is still large and takes a noticeable time to download:

The M101 image files for this experiment are available (see below) if you prefer to select them and display them locally. This is optional, but if you do use this you would be able to view the images with software running on your own computer. You will see a list of images. Select the one you want, right click, and "Save as ..." to download it. FITS files require ImageJ, Aladin, or ds9. Other file types may be viewed in various free or commercial programs, including ImageJ. The image we are using is one taken on September 2, 2011, and has a name with "20110902" in it.

In ImageJ, as you move the cursor over the image the control panel displays the location of the pixel and signal at that pixel. It may help for the following to zoom in on the stars. Use the "+" key and ImageJ will expand the view around the cursor. The "-" key takes you back out.

When the image first displays you will probably only notice a few bright stars. Use ImageJ's "image" menu, select "adjust", "brightness and contras", and set the maximum to something like 2000 units. With that you'll see a image that looks like the one one shown above for a previous night.

Examine the three stars - A, B, and the supernova. Find the brightest pixel in each one and write the signal down. Then, in the neighborhood near each star find a value representative of the background. This is not zero, so the signal you measure for a star is the sum of the star's signal and the background. We simply subtract the background from each measurement to roughly find the signal from the star.

Aside: For precision work an astronomer would use software that sums all the pixels in a star's image, and estimates the background all around the star. Just finding the peak and subtracting works well for learning how we do this.

3. What is the apparent magnitude of SN2011fe on the date the image was taken?

Recently a comprehensive paper by Michael Richmond and Horace Smith on the the supernova provided data for many nights, and we have plotted that data here together with measurements from Moore Observatory. 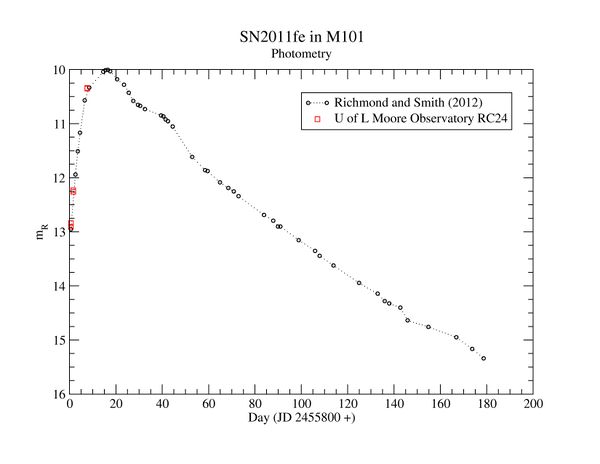 4. Compare your value to the light curve. How many days later than this image was the supernova at its brightest?

The absolute magnitude "M" of a star is the magnitude it would have if it were seen from 10 parsecs away. We're looking at the supernova in a galaxy that is known to be 6.6 Mpc away, so clearly it appears to be much fainter to us than it would be if nearby. The relationship between absolute magnitude M and the apparent magnitude at a distance d is

This means that you take the logarithm of the distance, multiply it by 5, subtract 5 from the result, and that's the difference between apparent and absolute magnitudes. For example if d = 10 parsecs, log d is 1, and m - M = 0. That's just what you would expect because M is defined to be m at d = 10.

6. Use the maximum apparent magnitude (slightly brighter than your measurement), and find the absolute magnitude M for a supernova of this SN Ia type.

You have just calilbrated a supernova of Type Ia. Now, if you measure the magnitude of a supernova of this type at its maximum, you can find its distance by solving the relationship given above for d. It is given this way:

We will apply this idea to another galaxy that just had a supernova appear in March 2012. Here's what that looked like: 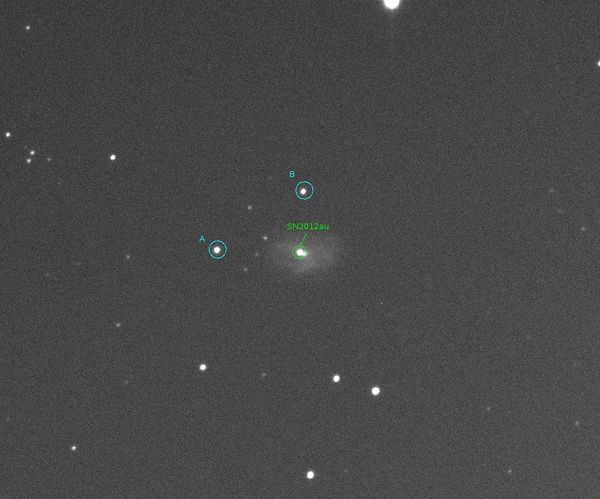 This image was recorded in red light on April 12, 2012, JD 2,456,029.6 . The supernova was at its maximum in March, on JD 2456005.5, about 25 days earlier. You can see from the graph of the light curve for the supernova in M101 that in 25 days the supernova drops in brightness by about 1.5 magnitudes. Although we did not capture this one at its maximum, we can still estimate its maximum knowning how it decays and how long it has been since the maximum.

The reference stars in this image have magnitudes

Once again, we have a version of JS9 set to provide this image to you:

7. What is the signal above background for star A in the image of the galaxy NGC 4790?

8. What is the signal above background of the supernova in NGC4790?

You can use either star A or B, or both, to find the apparent magintude of the supernova.

9. What is the apparent magnitude of the supernova in NGC 4790?

There is just one more step to finding the distance to the galaxy NGC 4790 from the apparent brightness of this supernova (apart from some questions of color and absorption by dust which we have ignored here). Since we observed it after maximum, you should subtract 1.5 magnitudes from the apparent magnitude you measured to get the magnitude m when it was brightest (remember that the brighter a star, the lower its magnitude. You know the absolute magnitude M too, from the measurement of M 101. Use

Images for M 101 are available here:

Images for NGC 4790 are available here: