'There are more things in heave and earth, Horatio, Than are dreamt of in your philosophy.'

Extrasolar Planets: Planets Around Other Stars

Exoplanets are planets around other stars. So far, mostly hydrogen/helium gas giants, similar to Jupiter and Saturn, have been found, but there are methods to detect terrestrial planets within habitable zones near some stars. The star 55 Cancri has five confirmed exoplanets, both gas giants and terrestrial. The NASA Kepler Mission is searching thousands of nearby stars for planets. At least a few have been found in an area warm enough to support water-based life. 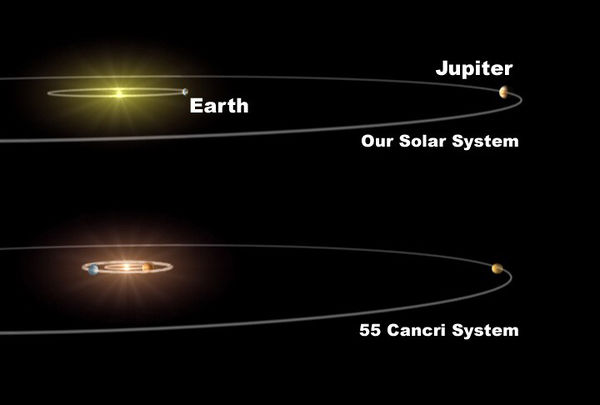 The 55 Cancri system compared to our Solar System

We need look no further than our own solar system to see how strange these gas giants and their moons may be.

Saturn: A Gas Giant Planet Around Our Star 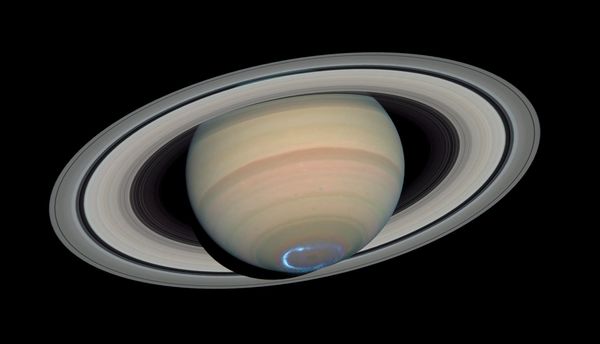 Image made by the Hubble Space Telescope taken in ultraviolet light

An exoplanet might look like Saturn, composed mostly of hydrogen and helium gases, with its own moons, rings, and lovely aurora.

Powerful lightning, approximately 1000 times that on Earth, streaks through Saturn's thick atmosphere, and hurricanes the size of Earth, with winds as high as 1600 km/h (1,000 mph). Its thick atmosphere gives the planet an average specific density of 0.7 g/cm³. Since water is 1.0, Saturn would float.

Saturn's rocky core is much like the Earth but denser. Above this, there is a liquid metallic hydrogen layer and liquid helium.

Saturn radiates 2.5 times more energy into space than it receives from the Sun. This comes from gradual gravitational compression, converting helium gas to liquid helium droplets. These fall towards the core, converting potential energy (energy stored in gravity) to kinetic energy (energy in the motion of the gas molecules) . The "temperature" of a gas measures how much energy its molecules have, as they zip around and collide with one another. In these collisions, the movement of the charges inside the atoms and molecules makes the infrared light they emit.

Saturn's axis is tipped about 27 degrees from the plane of its orbit, and most of the time we either look down on the "north" of the rings, or up on the "south". Once every 15 years from Earth we see the rings edge-on, and they seem to almost disappear from view. That happened most recently on September 4, 2009.

Saturn's rings change appearance as it orbits the Sun

Saturn and some of its moons, as it appeared in February 2010. The horizontal line is a little larger than the distance from Earth to the Moon.

Saturn's largest moon, Titan, 5150 km in diameter and half again larger than our Moon, orbits far from Saturn.

Unlike other moons, Titan has a heavy opaque atmosphere, with pressure 1 1/2 times that on Earth, similar to the pressure at the bottom of a swimming pool. The air is so thick that, in the 1/5th Earth gravity, people could attach wings to their arms and fly through the air.

The atmosphere's is mostly nitrogen, as is Earth's, with other trace elements, but not enough oxygen to support life as we know it. So far from the Sun, Titan is also very cold, 93.7 K (−179.45 °C) like a frigid desert, with methane-ethane lakes, rocky terrain, mountains, lightning in the thick clouds, and rippling sandy dunes created by high winds. 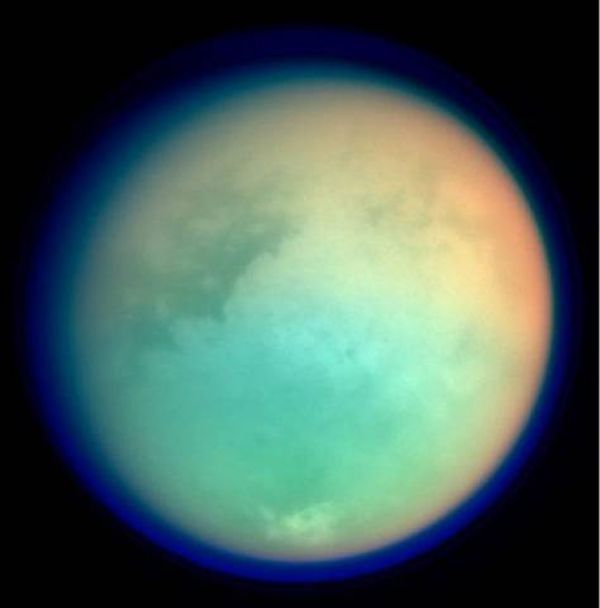 Titan taken by the Cassini spacecraft in a flyby on October 26, 2004. The image uses infrared and ultraviolet to penetrate the thick , opaque atmosphere, and is shown in false color.

The Cassini mission has discovered numerous river channels, lakes, islands and mountains on Titan, with radar imaging in close approaches, and with the Huygens probe that landed on the surface on January 14, 2005.

Mountains seen in infrared light by the Huygens probe, 2 km (1.2 mi) altitude, while landing on Titan

Hydrocarbon "seas", of methane and ethane look dark in radar.The largest is almost the size of the Caspian Sea or Lake Superior on Earth. 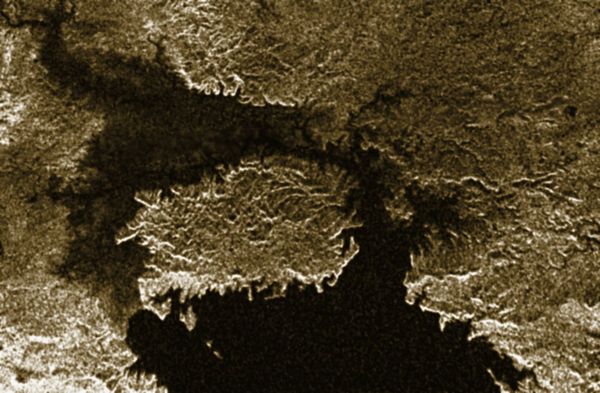 There are also wavy, sandy dunes. 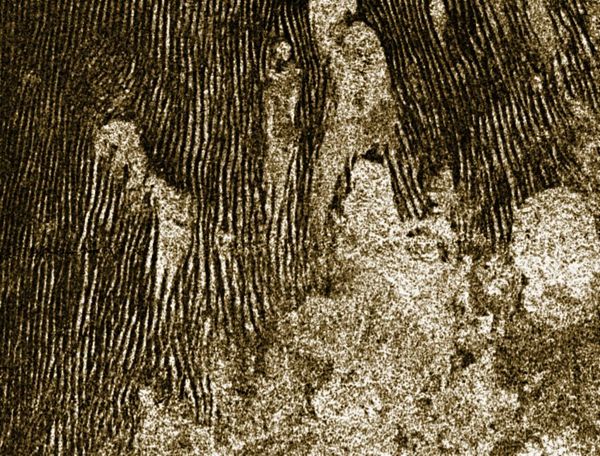 and "rocky" surfaces. The rocks are probably made of water ice.

Planetary scientists, trying to decide the destination for their next big mission, are thinking of surveying the surface of Titan by sending a balloon to float around Titan's thick atmosphere. 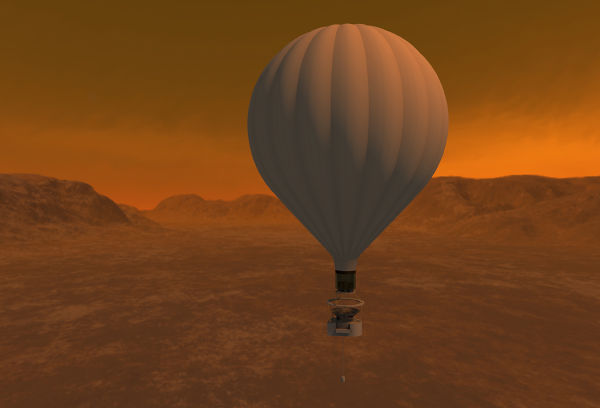 ESA, The European Space Agency, is proposing a 10-year study of Titan which will include the use of balloons

Enceladus, a mere 500 km in diameter, is only 1/7th the diameter of our Moon. It is relatively close to Saturn. Although its white icy surface reflects almost 100% of the Sun's light, beneath the surface tidal forces from Saturn's gravitational pull provide sufficient heat to create liquid water reservoirs that erupt in geysers. These jets spurt ice particles, water vapor and trace organic compounds, which have created a ring in Enceladus' orbit. There is speculation the water could harbor life in a satellite such as Enceladus, or Jupiter's Europa.

Fissures in Enceladus' south pole (to left) send out geysers

These icy jets form towering plumes many kilometers high. Due to the low escape velocity of Enceladus, some leave Enceladus altogether. Geysers on Earth are formed by the steam pressure from water heated where there is magma under the surface.

Iapetus , 1436 km in diameter, is twice as far from Saturn as Titan. Iapetus is a strangely two-tone planet in this bird's view.

Its 79 day orbit matches its 79 Earth-day long day. So, like Earth's Moon, the same side always faces the planet. Its leading side is dark and its trailing side is white, This suggests the leading side swept up particles of dust. Since dark colors absorb heat, while light colors reflect heat and remain cool, the dark layer on the snowy surface absorbed enough warmth to vaporize the water ice beneath. This water vapor then migrated and froze on the trailing cold side of the moon creating its snowy white surface.

The dark side contains organic compounds similar to the substances found in primitive meteorites and in comets; Earth-based observations have shown these to be carbonaceous, that is carbon based, such as frozen hydrogen cyanide polymers.

There is also a 10 km (6 mile) high ridge near the equator on the dark side of Iapetus (to the right in this image) which remains unexplained.

Snowy water ice on Iapetus amidst its craters

There are many job opportunities in space missions. Planetary scientists, engineers, technicians, and programmers may spend many years designing, building, and managing one. The Cassini-Huygens mission is a cooperative project of NASA, the European Space Agency (ESA) and the Italian Space Agency. The Jet Propulsion Laboratory, a division of the California Institute of Technology in Pasadena, manages the mission for NASA's Science Mission Directorate, Washington, D.C. The Cassini orbiter and its two onboard cameras were designed, developed and assembled at JPL. The imaging operations center is based at the Space Science Institute in Boulder, Colo.

For more information about the Cassini-Huygens mission, visit http://saturn.jpl.nasa.gov .