Discover the Rotation of the Earth

In 1851 Leon Foucault (1819-1868) was made famous when he devised an experiment with a pendulum that demonstrated the rotation of the Earth. Inside the dome of the Pantheon of Paris, Foucault suspended an iron ball about 1 foot in diameter from a wire 67 meters (220 feet) long. The ball could easily swing back and forth more than 4 meters (12 feet). He built a circular ring on which he placed a ridge of sand just under the swinging ball. A pin attached to the ball would scrape sand away each time the ball passed by.The ball was drawn to the side and held in place by a cord until itwas absolutely still. The cord was burned to start the pendulum swinging in a perfect plane. Swing after swing the plane of the pendulum turned slowly because the floor of the Pantheon was moving under the pendulum. We know this device today as the Foucault pendulum. Almost every major science museum has one on display. For this experiment you'll use photographs and videos of a Foucault pendulum if you do not have one nearby to visit.

While our clocks are set by an average 24 hour day for the passage of the Sun from noon to noon, the Earth rotates on its axis in 23 hours 56 minutes and 4.1 seconds with respect to the rest of the universe. From our perspective here on the Earth, it appears that the entire universe circles us in this time. It is possible to do some rather simple experiments that demonstrate that it is really the rotation of the Earth that makes this daily motion occur. 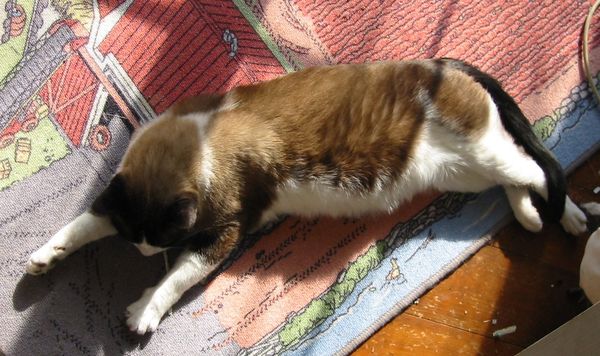 Our solar heated cat knows to return to his favorite rug at noon every day. He must move from time to time to stay in the light.

A Primer on the Foucault Pendulum

It is said that Foucault's discovery was based on an observation he made in a machine shop. If a long metal rod is clamped at one end and given a whack at the other, it will vibrate back and forth in a plane. The rod will oscillate rapidly back and forth, and although the motion dies down after a while, it remains confined to a plane in space, even if the rod is rotated. This is not an experiment you can repeat easily, but there is a demonstration you can do for yourself. Find a piece of string about a meter long (a meter is 40 inches). Tie one end of it to a weight of some sort -- most anything small and heavy will do -- to make a pendulum. Hold the other end of the string and start the pendulum swinging back and forth in a plane. As best you can manage, hold your hand in one spot in space while the pendulum swings. Walk around the pendulum, letting the string freely swing from your hand.

1. What happens to the plane of swing of the pendulum when you walk around your support for the "fixed" end?

Answer to this with what you actually saw. The apparent behavior will be influenced by how you hold the string, but in the perfect experiment you would not influence the swinging pendulum by your own motion. When Leon Foucault saw this, he thought that it might provide a way to detect the rotation of the Earth.

2. Why do you think this happens?

Imagine that you could locate a pendulum at the north pole of the Earth, pull the weight to one side, and start it swinging. Like the demonstration, it would swing in a fixed plane. Even as the Earth rotated on its axis, the pendulum would continue to swing in the original plane that it was started in. An observer watching from the rotating Earth, though, would see the plane of vibration of the pendulum apparently swing around. In 23 hours 56 minutes at the north pole the plane would sweep out one full turn.

There's a helpful website about a Foucault Pendulum in the southern hemisphere that you can visit at the School of Physics of the University of New South Wales, Australia.

Actually what we have said only applies to a pendulum at one of the poles. At the equator there wouldn't be any effect of this sort. There, the rotation of the Earth simply carries the top of the pendulum around; from space, the surface of the Earth will not seem to rotate under the pendulum. Consequently, the size of this effect varies with latitude, from a rotation in 23 hours 56 minutes at the poles to 32 hours in Paris to an infinitely long time at the equator.

Consider a pendulum at a mid-northern latitude, and think about it swinging in a north-south plane. As it moves toward the north, it starts out also moving to the east because if the rotation of the Earth. The closer to a pole a point on Earth is, the lower its speed; the closer to the equator the faster it goes. A point on the equator travels around the Earth once a day at 1674 km/hr (1040 mi/hr). That swinging pendulum starts out moving east faster than the surface of the earth at the north end of its swing, and slower than the surface at the south end. The Earth overtakes it at the south, and falls behind it at the north. If you are on Earth, it seems to you that the pendulum's swing is slowly drifting around.

Typical demonstrations of the Foucault Pendulum have a very heavy ``bob, the weight at one end, and are very long. The time it takes for a pendulum to complete a swing depends only on the length of the pendulum, not on how heavy the bob is or on big the swing is. A long pendulum is quite slow compared to the one that you experimented with here. 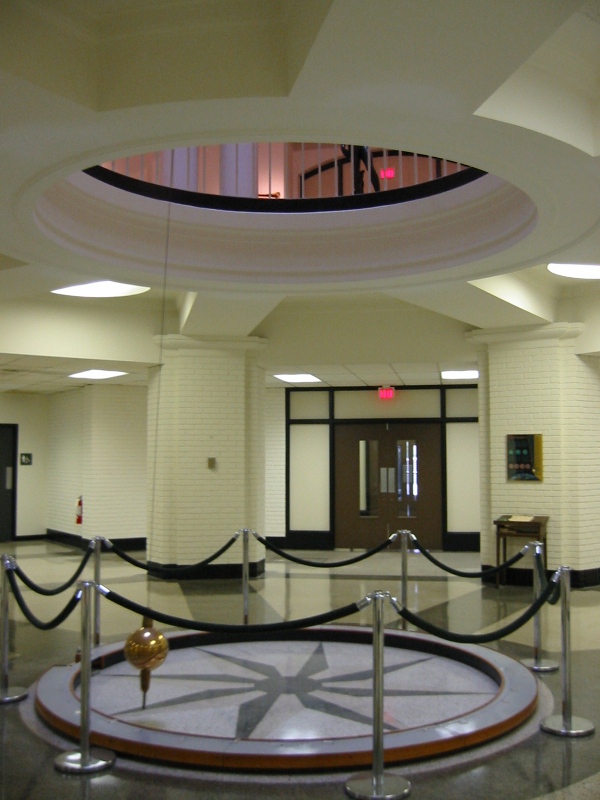 From the lower level of Grawmeyer Hall at the Unversity of Louisville you can watch the Foucault pendulum in motion. 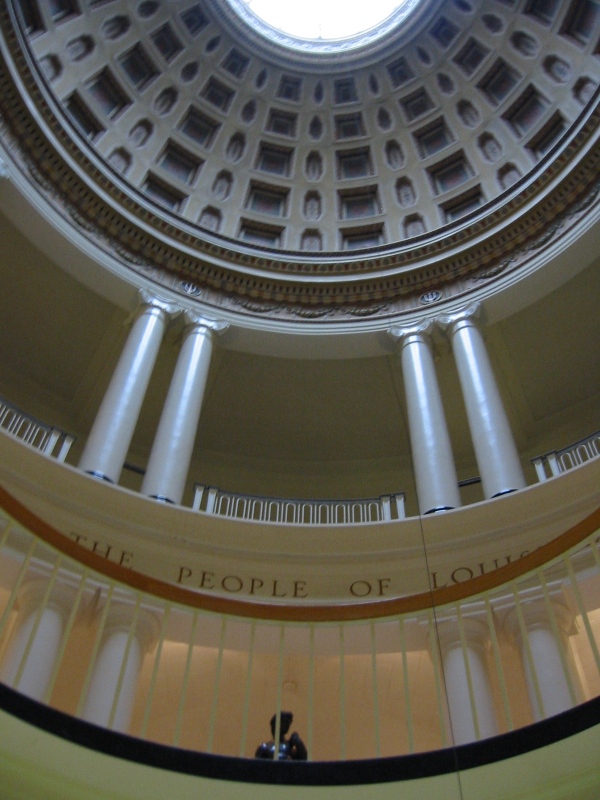 If you look upward you will see the skylight at the top of the dome supporting the pendulum. 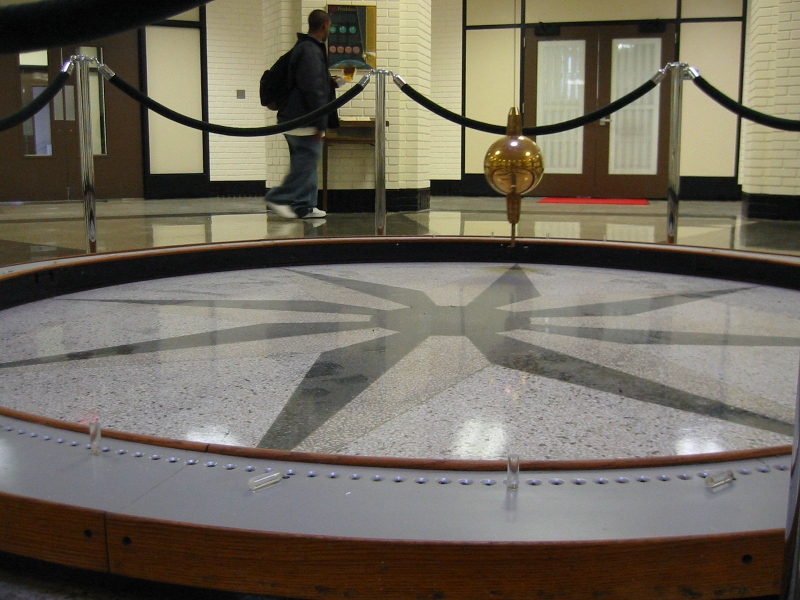 The pendulum swings away from the camera. 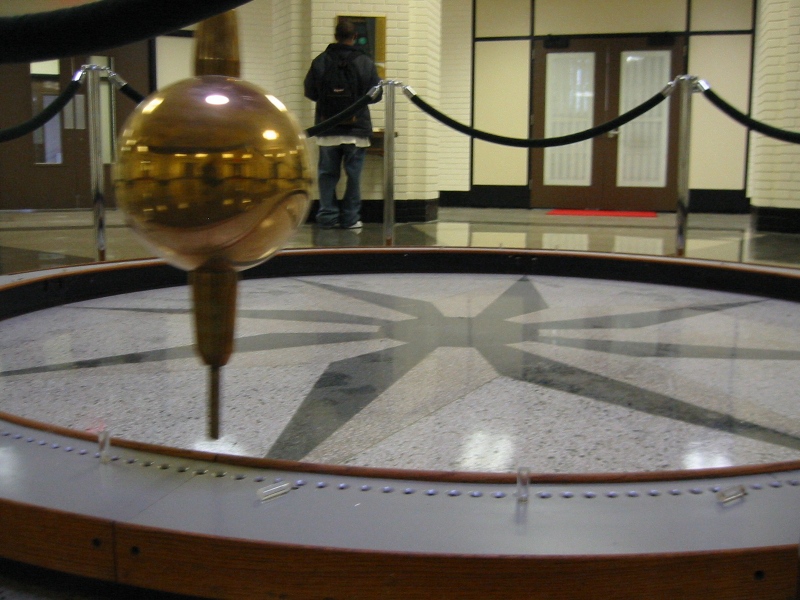 The pendulum swings toward the camera.

As the pendulum swings back and forth it passes over the compass ``rose on the floor and the marks on the ring that are 1 degree apart. The time it takes to complete one full swing is called the ``period of the pendulum. It takes many cycles of the pendulum for the slow rotation of the Earth to be apparent.

We have made a few movies of the pendulum that you should be able view on your computer. Here is one available now on YouTube:

4. How long does it take for this pendulum to complete one full swing?

There is a small magnet that is actuated on each swing to give enough impulse to the pendulum to keep it going. The magnet does not affect the period of the pendulum or the plane of its swing, but does insure that it keeps running 24 hours a day.

Now let's look at the rotation of the Earth by watching the pendulum change its apparent plane of swing. Notice that n this video the pendulum is swinging in a slightly different direction at the end from where it was at the beginning. Since the video plays in real time, you can measure the rate at which this change is occuring. The marks on the ring are 1 degree apart.

5. Over the course of this video, how many degrees did the plane of the pendulum's swing change by?

6. Based on this, about how long would it take for the pendulum to change its plane by 1 degree?

Since there are 360 degrees in a circle, and you now know how long it takes to go 1 degree, you can calculate how long it would take to go a full turn by multiplying by 360.

7. How many hours does it take this pendulum to complete a rotation?

You can check your answer by looking at photos taken several minutes apart. 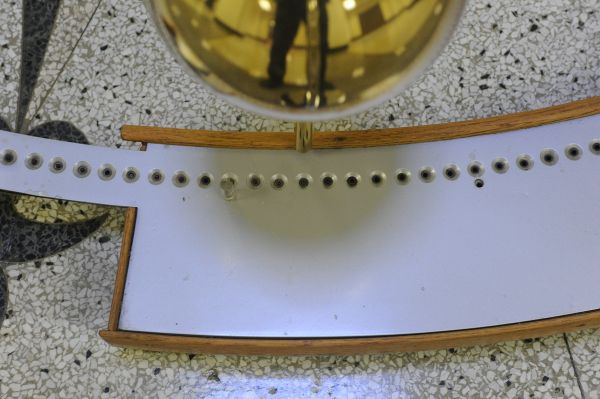 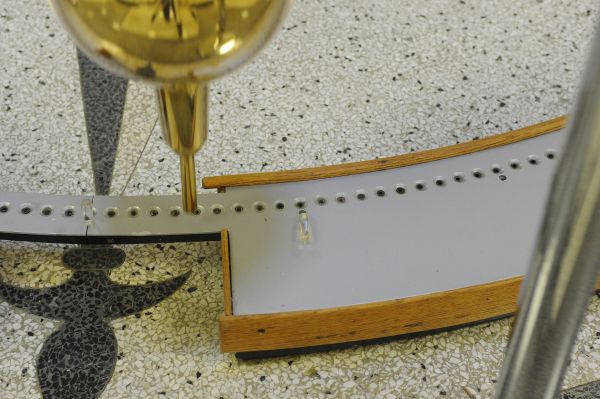 8. Note how much time elapsed between these two pictures, and how far the pendulum precessed. Since each mark is one degree, how many degrees per minute is this? Does it agree with your observation from the movie clip?

It is a easier just to notice which way the pendulum is rotating. The sequence of videos will tell you this from the point of view of the camera. Imagine, instead, that you are looking up on the pendulum from the floor.

9. Is the direction of rotation clockwise or counterclockwise as seen from the bottom looking up?

Just for the sake of stimulating a brainstorm, imagine that you are at the north pole of the Earth, looking straight up toward the north celestial pole in the night sky. You would see stars apparently circling overhead daily. Now imagine that the pendulum is there too, swinging back and forth overhead.