Mysteries beyond our understanding today are for us to solve tomorrow

So take a breath and relax. Nobody understands what most of the Universe is anyway ... except that it's dark matter and even more of it is dark energy. Dark matter and dark energy look like this video. 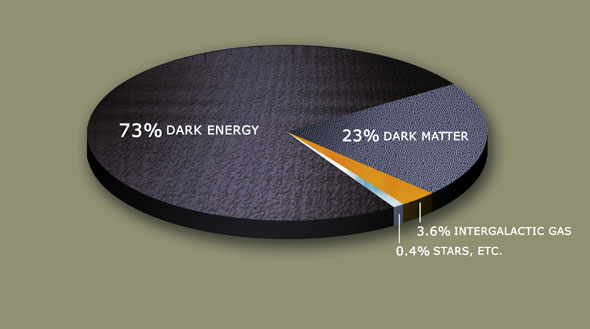 This chart shows the mass equivalence of dark energy. So if you imagine the amount of energy that would come from this much mass ...

Dark matter and dark energy are the missing mass and energy needed to explain the movements and rotations of galaxies over and above that which is apparent visually.

Einstein's equations did produce some effects which even he found unbelievable. They said the Universe would either expand indefinitely into the future, or fall back on itself into a giant black hole like a reverse Big Bang. He thought that the Universe should be stable and always the same size, since at the time Hubble had not yet found out about redshifts.

There is no way to have a stable universe unless something pushes out against gravity, so Einstein added that to his solution describing the universe. The strength of the push is determined by the cosmological constant, and he adjusted it to exactly counteract gravity and make the universe stable. After the expansion of the universe was discovered, Einstein called adding the constnat his "biggest blunder", and he took it out. Without it, the Universe's fate was determined only by gravity. The expansion should slow down, but it might not stop altogether. For the next 70 years, astronomers thought that was right answer. 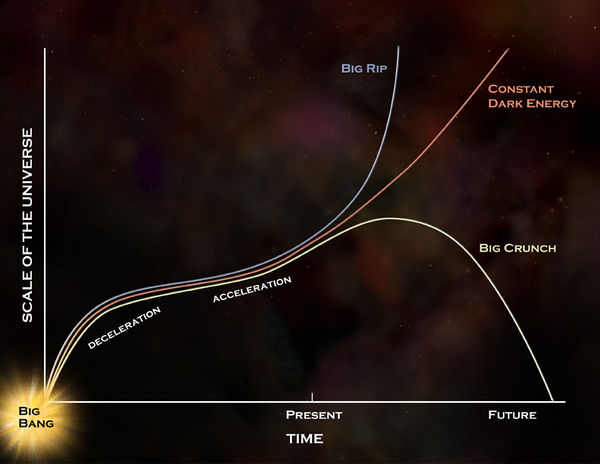 Possible fate of the universe

Surveys of distant Type Ia supernovae now show that the Universe's expansion is accelerating. Remote galaxies whose distances are measured by their Type Ia supernovae and the inverse square method, are fainter than they ought to be at that redshift. This result implies that the scale of the universe is increasing at an ever-faster rate. 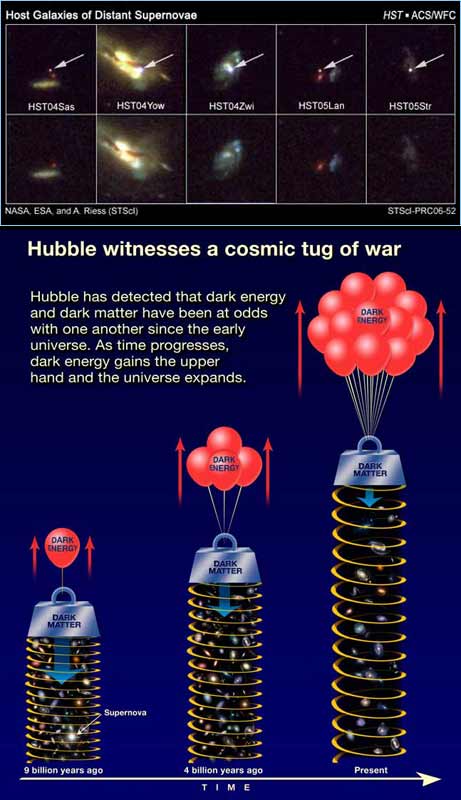 Dark energy is what is said to be pushing the Universe apart, while dark matter tries to pull it together. Dark energy seems to be winning, since the expansion of the Universe is accelerating! Einstein's cosmological constant is needed again. Today we know that the strength of the inflationary push is determined by the amount of dark energy in the universe, just as the strength of inward acceleration of gravity is determined by the amount of matter in the universe.

And the universe will end in a Big Rip. This means when dark energy pressure accelerates inflation to nearly the speed of light, different parts will no longer be able to see each other, or feel any attractive forces. No interaction can occur, neither gravitational nor electromagnetic nor weak nor strong, and all matter will be ripped apart.

First, the galaxies would be separated from each other. Arguably, this is what is happening right now, with galaxies that move outside the observable universe (approximately 46.5 billion light years away). About 60 million years before the end, gravity would be too weak to hold the Milky Way and other individual galaxies together. Approximately three months before the end, the solar system will be gravitationally unbound. In the last minutes, stars and planets will be torn apart, and an instant before the end, atoms will be destroyed.

The authors of this hypothesis, led by Robert Caldwell of Dartmouth College, calculate that the end of the universe as we now know it would be in approximately 50 billion years. (Credit: Wikipedia on the "Big Rip".)

A galaxy in the Big Rip

The end of the Universe would look something like this video.

We know about dark matter only because of its effects through gravity. It seems associated with galaxies and groups of galaxies. There are some errors in this video, but it gives the general idea accurately.

Just as we were able to calculate the mass of a planet by the orbital revolution of its satellites pulled by its gravity .... we can calculate the mass within a star's orbit around a galaxy. Wherever we look, however, the motion is faster than we expect for the matter we see in the galaxy, the more so, the farther we are from the center of the galaxy. This means in addition to the central black hole, stars, planets, gas, and dust within the orbit, there has to be something more. 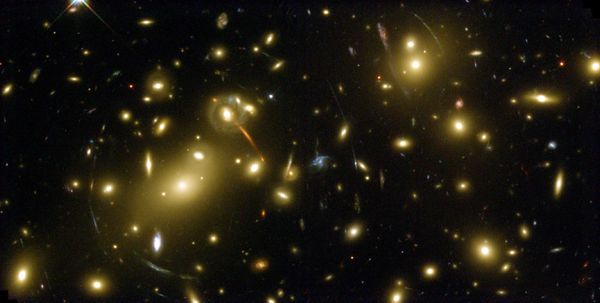 The Hubble telescope found cases where galaxy clusters create images of background galaxies by gravitational lensing. We can use the images that are formed to tell where the dark matter is in the clusters, as this video illustrates.

Dark matter, in the company of galaxies, is distributed throughout the Universe in a filamentary pattern that looks like Swiss cheese when it is sliced. But what is it? 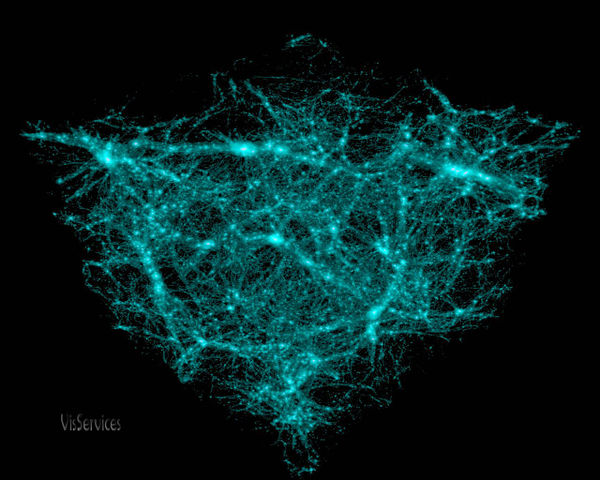 Dark matter is distributed through the universe with the galaxies in this model of large scale structure, that is part of a large model of the universe. We have a 3-dimensional map from the Hubble Cosmos Survey.

What Could the Dark Matter Be ?

Nobody knows what dark matter is. Is it some new particle no one has ever seen? We know it cannot be dust, planets, faint stars, or even small black holes. The best candidate is called a WIMP for "weakly interacting massive particle." If they exist, we may find evidence for them in experiments with particle colliders here on Earth, and by looking for evidence of their decay and interaction in cosmic rays.

Could the evidence for dark matter be accounted for by a modification of Einstein's theory of gravitation as curved space? Does it have something to do with gravitons, the hypothetical particles that are agents of gravitation in a unified field theory? Is it explained by Theory?

String Theory predicts the existence of gravitons and the interactions of fundamental particles, but it is a very complex theory adding extra dimensions to the familiar three of space and one of time. A graviton in perturbative string theory is a closed string in a very particular low-energy vibrational state. We look to string theory as a theory of everything that unifies our description of the universe.

There are four known "forces" in nature. Newton created the concept of force to explain why matter would change the direction and speed of its motion. He explained gravity as the force that caused planets to move in curved paths, and he formulated a mathematical law that accounted for the observed motions. In a similar way, the others -- electricity and magnetism, the weak force, and the strong force -- provide ways to calculate how a particle moves through spacetime.

Einstein changed all this. By explaining gravity as a distortion of space and time, he made spacetime itself part of the "theory of everything".

All the other forces have known massless particles associated with them, called "force carriers." Massless particles travel at the speed of light. Electromagnetic forces have massless photons. The strong force holding quarks and atomic nuclei together has gluons. The weak force responsible for free neutrons decaying into protons and electrons has W and Z particles. A photon we know well because it is the quantum of ordinary light. Gluons and the W and Z are studied at particle accelerators where they appear in collisions of energetic particles. But, nobody has seen the elusive graviton that should be the force carrier for gravity and would appear in the extreme conditions when quantum gravity effects would be significant.

We expect these effects to occur when the universe is not described by General Relavity, in the smallest natural element of time. How small is that? This fundamental unit of time is found by combining G (constant of gravitation from Newton's Law of gravity), h (Planck's constant from quantum mechanics), and c (speed of light) to make

For this incredibly small time (the very , very, very early universe), and for distances light would travel in that time,

we need a theory of quantum gravity. String theory may do that. It leads to endless varieties of particles, and perhaps an explanation for them all. 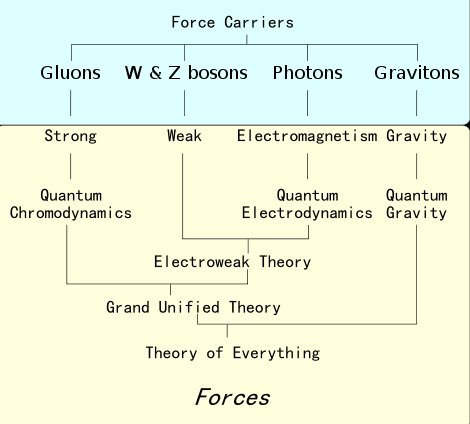 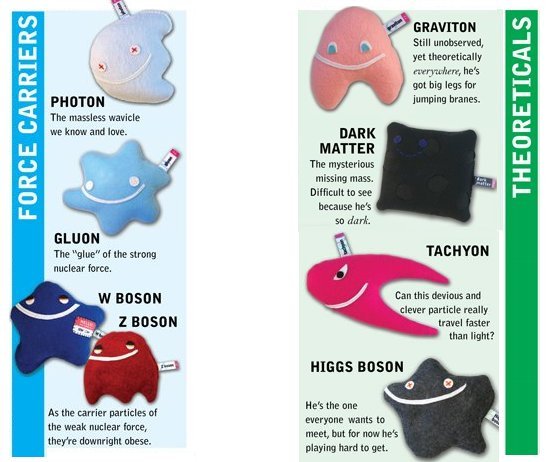 Dark energy permeates all of space and increases the rate of expansion of the universe. In the standard model of cosmology, dark energy accounts for about 73% of the total mass-energy of the universe. Dark energy is a sort of anti-gravity. Although we have a mathematical description of its action on the universe, we do not know exactly what it is. One way we may learn more is by studying the warping of spacetime near black holes.

The spectrum of the cosmic background radiation we observe is an exact match to the spectrum we expect from the gas in the early universe, redshifted because we are seeing it at such great distance. There is a slight pattern in this light, a structure that has the correct scale to have been the precursor of the structure we now see at much larger scale in the distribution of galaxies and dark matter. 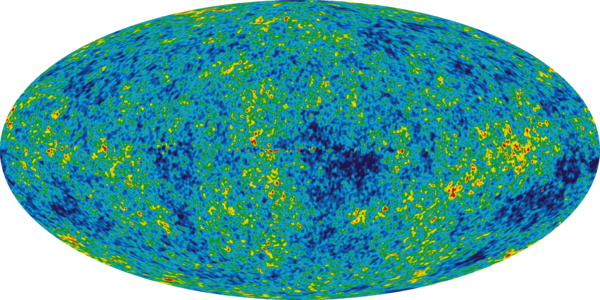 The picture makes the differences seem very large, but they are actually very slight differences in temperature or redshift due to the variations in the density of the gas. These fluctuations in density were embedded in the mass-energy of the universe at the moment it began, yet they correlate farther across space than light could travel in the time since the beginning. How can that be?

The answer is that Universe "inflated" faster than the speed of light immediately after the Big Bang . The stretching of space faster than light speed is actually allowed by relativity. From the distant cosmic background radiation we know how big and how long this inflation was. From observations of supernovae that are closer to us, we know that it slowed to a steady expansion very early, that gravity has acted to slow it down more, but that now it is speeding up again.

The agent of inflation is termed Dark Energy. The Hubble Constant (H), the strength of gravity (G) and the observations of inflation in the cosmic background and through supernovae tell us that Dark Energy makes up a surprising 73% or so of the mass-energy of the entire universe. 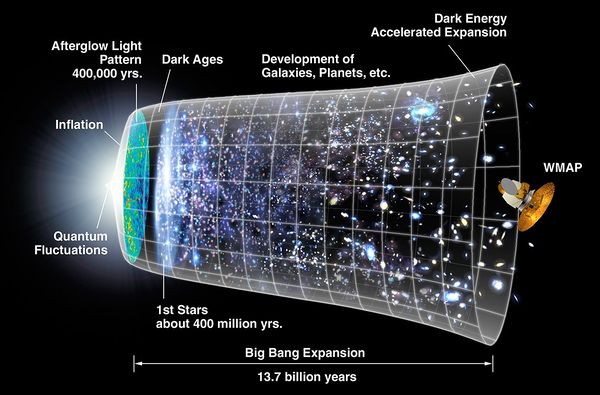 As shown in the graph at the top of the page, the Universe had rapid inflation immediately after the Big Bang, expanded steadily and slowly for billions of years, and then accelerated again.

Structure of the Universe Including Galaxies, Dark Matter, and Dark Energy

The structure of the Universe now, including dark matter and dark energy resembles the Universe of the galaxies we can see, and looks like soap bubbles or swiss cheese, with filaments, clusters, and hollows. How did the very first fluctuations in density lead to this structure? What role does the dark matter and the black holes at the centers of galaxies play?

Beyond Einstein, beyond spacetime, beyond the smallest known particles, beyond string theory, the explanation of everything may not yet have even been imagined. As some philosphers have speculated, it may be beyond our ability to imagine.

Arthur Eddington, a famed British astronomer of the last century, discovered how stars provide their energy by converting mass to energy in their hot dense interiors, and observed the bending of the path of starlight passing near an eclipsed Sun. He also said

It is a mystery left for the future.