Our diffusion cloud chamber is a replica of this design. It is a an insulated metal box about 15 inches on a side. A large window on the top allows you to look down on the black interior. Inside the box and below the surface you see is space for a dry ice -- frozen carbon dioxide (CO2). The dry ice cools the bottom pan to about -78 C. The pan is covered with methyl alcohol (wood alcohol). The vapor of the methyl alcohol becomes supersaturated as warm alcohol rises along the sides of the box and diffuses toward the cold pan at the bottom. The saturated vapor is illuminated through windows in the side of the box. The arrangement of a cloud chamber and an illuminating projector is shown in the photo. We use an LED flashlight instead now. 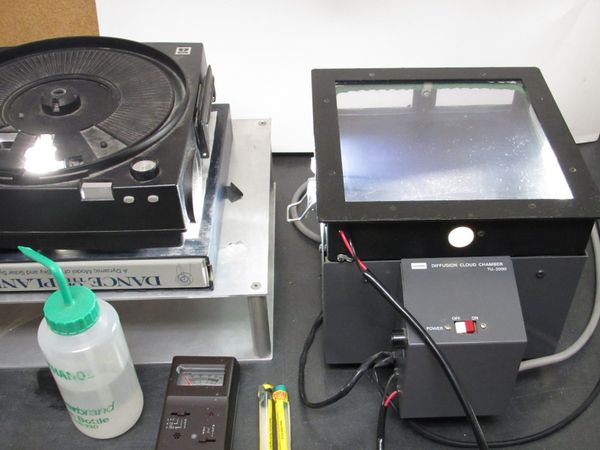 Cloud chamber illuminated with a projector.

Dry ice cools the interior of a cloud chamber where methyl alcohol forms a supersaturated vapor. Cosmic rays passing through the vapor cause it to condense and mark tracks of the particles. A light source illuminates the tracks from the side to make them visible briefly.

This video shows you how you can also make one at home:

How to Make a Cloud Chamber

Although the cloud chamber we will use for this experiment in the lab has its own light sources, we will use an LED flashlight because it provides a brighter light through the chamber and less stray light that hides the tracks we seek. The lab cloud chamber also has power supply that is intended to help clear tracks, but we will not need it for this experiment. Therefore, there is no need to have power supplied to the instrument, and for your safety make sure that the power switch is ``off when the chamber is open.

Check that the windows are clear. You may need to clean them off with a little water on a paper towel. It helps if you do this this just before you close the chamber. If you leave a thin film of water on the windows they will be less likely to fog when the chamber is cooled.

To see cosmic rays you will need to create supersaturated alcohol vapor inside the chamber. The first step is to add the dry ice that will cool the alcohol. The assistant will help crush solid CO2 (dry ice) to a powder. The dry ice should be enough to cover the Teflon plate that forms the bottom of the cloud chamber with a layer 1 to 2 cm deep. If there is not enough, the temperature will not be uniform, and convection currents will interfere with track formation. Place the dry ice on the Teflon inside the box; springs below the plate will push it into contact with the bottom of the chamber. Because dry ice is so cold that it could burn you, whoever handles it has to be very careful. Use a paper towel, a plastic bag, or gloves to protect your hands. It is best to let the assistant do this for you, but you should observe the process. After the dry ice is in place, fasten the chamber back onto the box. There are hooks and clasps on the side that hold things in place. Check to be sure that the chamber is level. There are three adjusting screws on the bottom for this purpose.

The bottom plate that goes inside the chamber has felt on one side. Pour a generous amount of methyl alcohol into the bottom of the chamber and insert the bottom plate felt side down. Make sure that there is enough alcohol to cover the bottom of the chamber and to saturate the felt completely. The felt wrapped wires on the inside should also be saturated with alcohol. The felt should be soaked until soggy, but there should not be a puddle of alcohol in the bottom. Too much alcohol makes an insulating layer, but too little alcohol prevents vapor from forming.

There are two tricky things about making the cloud chamber work well: creating a supersaturated vapor and illuminating the chamber so that you can see tracks. It works best if the light enters the chamber without hitting the edge of the bottom pan. Once you think you have the LED light adjusted right, turn it off and wait about 10 minutes. This should be enough time for the alcohol vapor to reach the proper state.

Turn on the LED flashlight. The room lights should be off. Look down into the chamber. Near the bottom you should see a light fog from large droplets. As you watch, suddenly a straight track will appear when a charged particle zips through the chamber. Once you have seen one track, it will be easier to recognize others. If you don't succeed soon, ask for help. It is possible that things are working and you can't find tracks because the lighting is wrong. Once tracks are visible, experiment with the high voltage clearing field. This may help to dissipate the clouds that results from frequent track formation, but usually we do not need to turn the high voltage on at all. 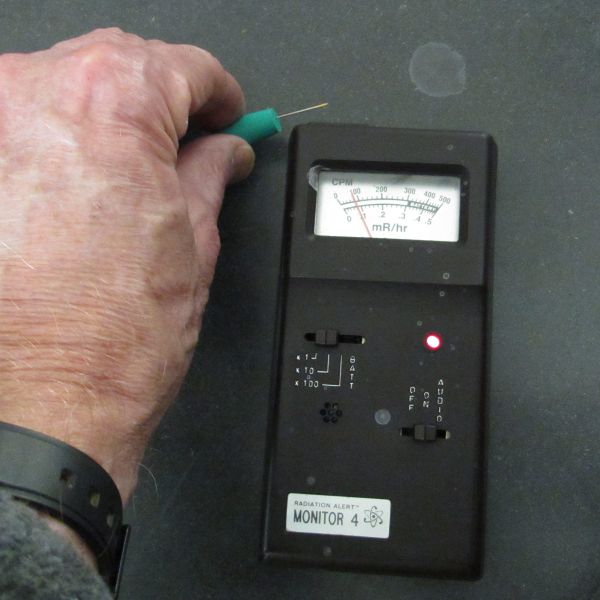 Ask the assistant for help with the radioactive sources. We have alpha (He nuclei) and beta (electrons) sources on small needles that may be inserted into the side of the cloud chamber. The figure shows the beta source at the window of a particle counter. The counter measures the number of charged particle pairs created per second by the source in units of roentgens per second. A milli-roentgen is about 2 million charged particle pairs per second. 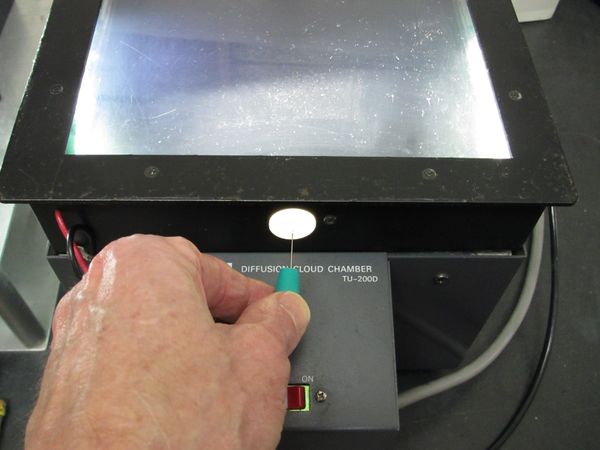 The sources may be inserted into the side of the cloud chamber.

First try the alpha source. Alpha particles are actually helium nuclei, but they are emitted in the decay of some heavy naturally radioactive elements. We have a very weak radioactive source on the tip end of a needle that can be inserted into the cloud chamber. The assistant will show you how to do this. You will notice immediately that there are very many alphas coming from the tip of the needle.