When small stars die and their source of fusion energy is gone, gravity overcomes the pressure of their gasses. The atoms are stripped of their electrons, and the nuclei and electrons are compressed more and more until some other force, if one strong enough exits, balances gravity.

In white dwarf stars it is the pressure of the electrons that stops the contraction. What is left is still familiar, a gas of electrons and the nuclei of the atoms. Yet if the star is too massive, more than about 1.4 times the Sun's mass, the pressure the electrons exert on one another is not enough to stop gravity. Now electrons and protons collide within the nuclei with enough energy to form neutrons. Since there are exactly as many electrons as protons in the star, only neutrons now exist. It is the pressure of the neutrons on one another, physically staying out of each other's space, that keeps the star from catastrophic collapse under the force of its own gravity. The star is a giant nucleus!

With a little more than twice the Sun's mass, the neutron pressure is not enough, and the star gives in to the inevitable. We do not know of any other force that will stop the collapse of a very massive star. The result we see from outside is a black hole. What happened to the neutrons?

What does matter crunch down to inside a BLACK HOLE? Neutrons are squeezed down into their component quarks, the fundamental particles of matter as we know it. Beyond that, whatever exists must be like the universe at the moment of the Big Bang. Remarkably, as we will see when we study Einstein's Relativity, we cannot know what is inside the hole. All we see is gravity.

Yet M87 contains a 3 billion solar mass black hole. Matter around its center is orbiting at tremendous speeds just as in particle colliders at CERN here on Earth, a machine we build to study the constituents of matter. The Large Hadron Collider is the latest one, and the largest ever built. By smashing protons into one another at the highest energies we can make, it will show us the more fundamental components. 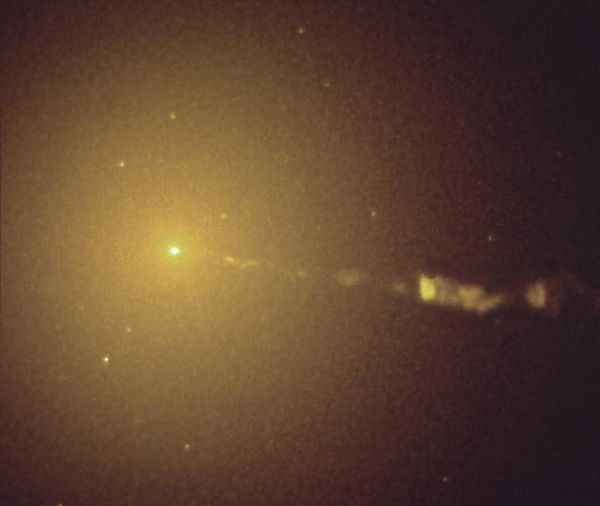 Black hole in the center of the giant elliptical galaxy M87

Just as protons, neutrons and electrons make up atoms, there are subatomic particles that make up protons and neutrons. An electron seems to be structureless. A proton is made of 2 up quarks and 1 down quark, while 1 up quark and 2 down quarks make a neutron. You might say a neutron is a little more "down" on itself.

In nature we always see charges as multiples of the charge on the electron, which is simply -1 unit of charge. The electron's antiparticle, its exact opposite, is the positron with +1 unit of charge. Put the two together in a collision and what do you get? That's right. Nothing but energy.

How do quarks give the proton +1 charge and no charge to the neutron? It turns out if the "up" quark has +2/3 of a unit of charge, and the "down" quark has -1/3 unit, then it works just right. Try the math and you'll see that with this the neutron has no charge since it has two "downs" and one "up".

A neutron has a tiny bit more mass than a proton, which is why it will decay into a proton and an electron given about 15 minutes outside a nucleus. Since one kind of quark can change into another kind, and there are a zoo of other particles as well, this is even more confusing.

When you become an "high energy" particle physicist, you may want to memorize these. But for now, it is best just to know there is much food for thought in the study of the fundamental constiuents of matter. 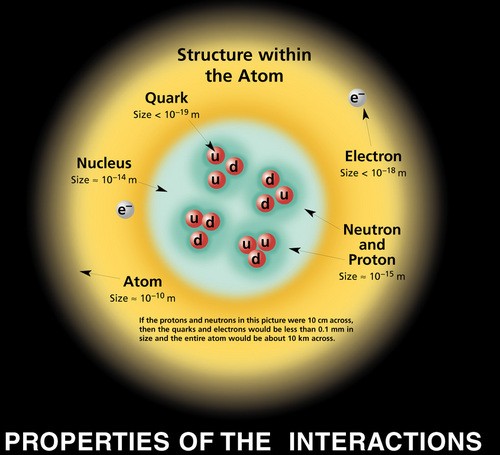 Quarks in an Atom

You Can Recognize Some Subatomic Particles

Although we cannot see the particles, accelerators can send charged particles through a bubble chamber of liquid hydrogen, or use an electronic detector to record the particles tracks. When charged particles speed through a magnetic field, the curvature of their paths reveals mass and charge. Electrons are such light particles they show up as spirals. If they spiral one way they are negatively charged electrons. If they spiral the other way they are positively charged positrons. See if you can identify tracks of electrons and positrons. How many of each can you find? Heavier particles with more momentum curve less -- it is harder to keep a truck on a curving road than a small sports car. Neutral particles remain invisible because they do not interact with matter, until they split into an oppositely charged pair, making a "vee" of positive and negative particles. See if you can find a neutral particle splitting. Sometimes charged particles split into many particles. See if you can find these. 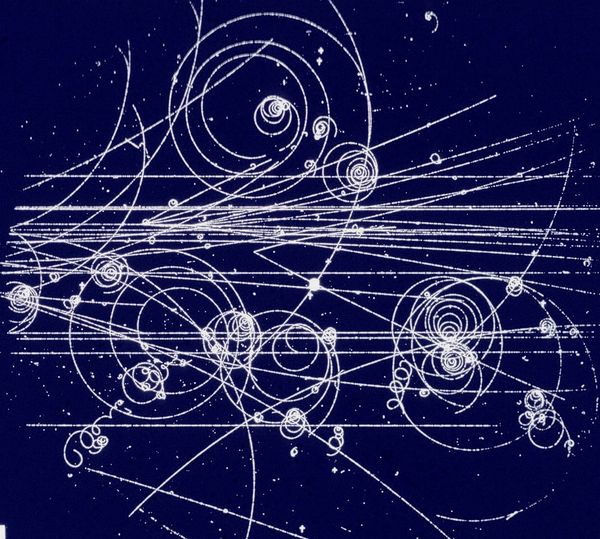 Tracks left by charged particles in a bubble chamber

Subatomic particles can be very interesting and "charming". To distinguish them from one another, we identify properties that do not change when they interact. Some of these you know already -- charge and mass, for example -- but there are a host of others. As you might guess, one of these is called "charm". Particle physicists are inventive with names.

There are lots of subatomic particles

The matter of our everyday world is made of baryons, heavy particles like protons and neutrons. There are also the electrons that go into making atoms and molecules, providing the glue that holds atoms to one another. As we talk about stars, fusion, and the early universe you may hear about other particles. There are neutrinos, produced inside stars when fusion occurs. They zip through us and the Earth all the time but hardly ever interact with baryons. Cold dark matter is abundantly present in our galaxy and others, providing the glue that holds stars in their orbits. We do not know what it is, but there seems to be more of it than the baryons that we can touch. Experiments in laboratories like Fermilab and CERN are helping us understand the universe that is remote from us in space and time.

People who wish to know one of the last secrets of the Universe either go to Fermi Lab in Illinois to find a job in the US, or to CERN on the French/Switzerland border where Europe and the US collaborate in an amazing laboratory under ground.

Here are two web sites with more information about the fundamental particles and our efforts to understand them: